That's how you programme electronic music

I just attended the final concert at the Di-stanze festival in Leeds and I thoroughly enjoyed it. Here's my review. 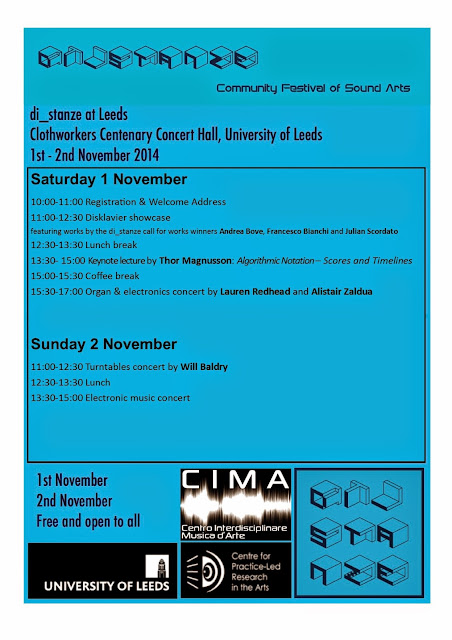 Joanne Armitage kicked things off with an on the edge bit of Live Coding. It took a few moments to get going during which some code appeared and reappeared on the screen, but when it did get underway there were some cool sounds. Key set the scene for a programe expertly curated by Ewan Stefani and James Mooney.
I always enjoy Ewan Stefani's work for its pace and upfront approach to material. Three Abstractions kicks and it kicks hard. Being run over by a train is one hell of a thrill on a multi-channel genelec system, but this is not just a gimmick. The dialogue of rhythmic entities inside the material works really well. DT/P borrows from electronica while remembering the masters of electroacoustic music. It's actually rather funky and received an excellent reception as it should.
After a brief interval Pascall Ansell as Panelak took his trousers off. Barefoot in a hand made dress he twitched erratically at the mixing desk walking to and away from the mix position during the performance returning with a white mug which somehow worked brilliantly to cut through the arseclenching sterility of norms in sound diffusion. The two tracks he performed interleaved in the  second half are glitchy experiments in sound design which exist somewhere in the void between modern dance music and sound art. I couldn't take my eyes off him throughout and my ears were assaulted in the very best way. This is pumping, thrusting, music which is as beautifully crafted as it is lo-fi. Panelak left me wanting to hear more and to dive into his singular world of performance art. This is refreshing stuff and he is one to watch! (I have since listened to his album Heimat - and you must get a copy! It's bonkers and brilliant and I may have to review it under separate cover.)
Alannah Halay in person is very quiet. This sweet introverted exterior is in significant contrast to her The Ridge is Beyond the Edge. Described as 'a state of limbo induced by the act of 'waiting to wait' within a timeline that is not straightforwardly linear', Halay works with clocks and voices announcing time and counting in a thunderous and nightmarish composition which took me to the feverish place of not sleeping. I loved this full frontal snapshot of psychosis.
In stark contrast, Oliver Thurley's Burrow "draws inspiration from one of Franz Kafka's last short stories The Burrow in which the narrator struggles to locate the source of mysterious noise which breaches the stillness and security of its home. Gradually fear begins to overcome him that an unseen 'beast' approaches". It is a startling moment when the room is injected with high frequency sine waves just on the edge of our hearing. You can feel it in the bones inside your head which is a strange sensation which seemed to make the room itself incredibly loud. Punctuation came from a series of beautifully detailed thumbing a of strings and tiny details. Thurley's work suggests he may just become a legend of the craft in future.
The show closed with a blast from the past with Rob Mackay's compelling Voicewind, written in 1998. This superb demonstration of all that was brilliant about electroacoustic music in the late 90's is a concise and well paced outing based on a text by Sophocles. The natural world collides with a choir of human voices in a tale of human frailty and hope in the vastness of the universe. Powerful and uplifting stuff.
A brilliant bit of programming by Mooney and Stefani which showcased an exciting  and diverse set of composers on a lovely sound system. Panelak, Halay and Thurley have been on my mind all evening which speaks of the power of their work.  More please!
Posted by Paul J. Abbott at 08:07

Paul J. Abbott
Paul J. Abbott is a composer and performer currently based in Leeds, UK. Known for his high power electronic work and experimental compositions, he is also an experimental vocalist and founding member of DepartureLounge Arts Collective, Catch 22 and The MrWobblyHead Project.